UZ Brussels migrated 100 of its academic and administrative  employees to Microsoft Lync. This gives them a central user interface for chat, email, telephone, and audio- and video-conferencing via the IP network. The software also allows them to work from home more easily. Meetings are now much more efficient, both between the  various laboratory departments and from home or abroad. Switching the chat to telephony services, sharing documents, and starting an audio- or video-conference can now be very fast and intuitive. Realdolmen is supervising UZ Brussels by providing advice and  performing technical modifications during the migration.

Time is a critical factor in hospitals. To enable its staff to be more efficient with their time, UZ Brussels is integrating Microsoft Lync in various phases together with Realdolmen. Microsoft Lync provides telephony, presence statuses, instant messaging, and audio-, video- and web-conferencing services with a single interface. “The emphasis is clearly on consolidation and integration,” says Rudi Van de Velde, CIO of the hospital. To give an example: with Lync you receive a message via email that someone is trying to call you, or you receive a voicemail message straight to your mailbox. This increases the application and availability of employees, so they can collaborate more easily and efficiently.” It’s important for UZ Brussels that Microsoft Lync can be integrated with other elements of the ICT environment, such as the existing video-conferencing services, telephone exchange, and other Microsoft applications used by the hospital.

Realdolmen is rolling Microsoft Lync out in various phases. There are currently 100 employees who have already switched over to Lync. The fifty employees in the ICT department, of which around a half are developing medical software, were the first ones to make the switch. The majority of the ICT department works from home one day per week. Now, thanks to Lync, they can continue to work on their full range of duties while they work from home. No meetings have to be rearranged, and remote support is available too.

Once a few initial cosmetic problems had been ironed out, more employees were gradually moved to the new system, particularly from other administrative services who wanted to start working from home or organizing conferences. The Multidisciplinary Oncology Consult (MOC) is now also working with Microsoft Lync. “This group of forty oncology and other specialists can start remote meetings to provide advice to doctors via Lync. Photos of patients can also be shared easily to help illustrate a point. The doctors in question don’t even need Lync. They are invited to take part in a conference call via an email with a URL. When they click on it, the meeting opens in their browser,” explains Robin Demesmaeker. “This saves a lot of time because they no longer have to physically go anywhere, and the ease-of-use is improved for the MOC and doctors who are consulting them.” UZ Brussels hopes to be able to discuss 10% of patient dossiers with the doctors in this way by the end of 2013.

Alongside around twenty administrative employees, Microsoft Lync is also being used by a UZ Brussels delegation working in Abu Dhabi. “There was lots of communication between Abu Dhabi and Brussels during the start-up phase of the fertility service in collaboration with a local hospital. This was all run via Lync because there was only one internet connection required for staying in contact and setting up meetings,” explains Robin Demesmaeker.

There was very little training required thanks to the user-friendly Lync interface. “We notice that when we introduce Lync into a new department, the demand for implementing it increasingly comes from the users themselves,” says Robin Demesmaeker.

The amount of time that users are now saving thanks to Lync is difficult to work out exactly, but their productivity has certainly increased. “The employee’s presence status information makes it clear when someone is available, for example for a telephone call or web-conferencing, and the most suitable channel of communication can be decided depending on what it is,” explains Robin Demesmaeker. This choice takes place within an integrated interface. “So you can switch from an email message to instant messaging, or even start an audio- or video-conference between two or more people. This means users lose much less time on unnecessary phone calls, speaking in and picking up voicemail messages, or emailing back and forth.”

As well as saving time, this increased productivity also saves costs, although it’s difficult to put an exact number on it. “We have a very concrete example from one of our laboratory departments,” says Robin Demesmaeker. “The laboratory department meets regularly with researchers from other institutions via video-conferencing. The WebEx subscription that we were still using in 2012 costs us 800 euro per month. But with Lync we only need to pay a one-off licence fee, which brings an enormous cost-saving with it. The telephony costs are also much lower because a large proportion of communication now takes place over the internet. This results in a real windfall, especially for a project like the one in Abu Dhabi.”

Microsoft Lync is also user-friendly behind the scenes. “The existing Alcatel exchange was used as a gateway to Lync,” adds Robin Demesmaeker. “We can easily plug Lync into this gateway. This means the hospital is expanding its existing telephony infrastructure possibilities into a multimedia platform via Lync. “In the future we would like to switch over to a fully digital telephone exchange. But before we can make this step, we first need more certainty. Downtime at the info desk would be unacceptable, considering the financial impact this would have.” Lync will also be rolled out further in future. “We foresee that a further 80 employees will be able to rely on Lync for all their communication by the end of 2013,” concludes Robin Demesmaeker.

UZ Brussels was looking for a Unified Communications solution to make it easier to hold meetings remotely or from home.

Microsoft Lync appeared to combine all the desired UC functions with telephony. Realdolmen is supervising UZ Brussels by providing advice and performing technical modifications during the migration. 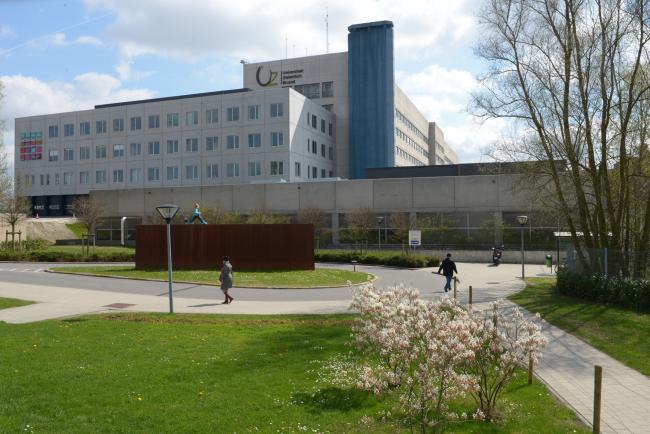