No mountain too high

The weekend of June 16th was a top weekend for a group of Realdolmen staff members. As these colleagues become (biking) buddies, there was magic in the air and every mountain suddenly seemed conquerable. After having climbed Mont Ventoux last year, this time around they tackled the Stelvio Pass. Once again, they ended their conquest at the summit.

After the success of the Mont Ventoux event in 2017, plans were quickly made for 2018. After a brief deliberation, the decision was made to take part in the Climbing for Life event on the Stelvio Pass in mid-June. The Stelvio Pass is a mountain pass in the Italian Alps. This "Passo" is best known for being the location of the heroic mountain stages in the Giro d'Italia (Tour of Italy) bike race. The Stelvio pass is one of the highest paved mountain passes in the Alps. In other words, it is certainly not something to be tackled without training first. Fortunately, the Realdolmen cycling group regularly gets together for a bike ride. Every training session is an amiable affair. In Italy, too, there were plenty of fun moments to keep everything relaxed. It became a mini holiday for these colleagues as they bonded over a common passion.

Our reporter on the spot, Tom Knockaert

After months of preparation, it was finally time. On Wednesday June 13, most of the participants who would tackle the Stelvio Pass drove to Bormio. Although everyone took a different route, by the evening everyone had gathered at the Hotel Giardino in Bormio, which was rechristened "Hotel Realdolmen" for the occasion.

After a good night's rest, the final preparations could begin. To get some climbing rhythm going, we chose to climb the Gavia pass from Bormio on Thursday June 14. This is a climb of 25 km that starts off quite gently, but has a tough finish. After the obligatory photos at the top and a quick descent, some brave souls chose to complete the ascent to Bormio 2000.

On Friday, June 15, everyone in our 30-person delegation was present. The weather was promising, with the sun shining over the mountain tops. With the stress gradually building, most riders opted to complete a leisurely climb to Lake Cancano. It was a good rehearsal for the hairpin bends of the Stelvio Pass. The rest of the day was a chance to relax.

Saturday, June 16: D-Day or rather S-Day. On registration there were two possibilities: climbing the Stelvio Pass or Il Pirata. The group was evenly divided over both options. The weather gods also smiled on us on Saturday. There was no rain, the temperature was great and it was sunny. The 'Pirates' started off at a good pace; they were part of a group of a few hundred cyclists that headed towards the foot of the Mortirolo. The Mortirolo is one of the most notorious mountain passes in Europe. Caution was the word of the day. After a steep ascent and descent, the next challenge was waiting for us: the Gavia Pass. This was the same as on Wednesday, but from the other side. Most people would be happy to call it a day after this, but to top it off we decided to climb the Stelvio Pass. A mythical mountain pass that has been the scene of heroic battles during the Tour of Italy multiple times.

In the evening we all looked back at our performances and exchanged stories. It shouldn't be forgotten that a monster like the Stelvio Pass – with 21 kilometers of climbing, 48 hairpin bends and gradients up to 13% – are completely different to what we are used to in Belgium.

A healthy mind in a healthy body. Biking together is something we truly support. It contributes to a healthy balance in life. There is also another benefit too: colleagues get to know each other and interact outside of the workplace. They exercise together and work towards a personal goal. One of our values is "co-operation defines our success". Encouraging each other to get the best out of ourselves during those last grueling kilometers or during a difficult project is something we try to do every day here at Realdolmen. We encourage each other to make it up the mountain, so that everyone can be proud of themselves at the finish.

"I look back fondly on the last few days. We had the best possible conditions and a super group to ride with. We were there for each other and the hotel had nothing but kind words about us. Thanks to everyone. Once again, the message is clear: to get there together as best we can." - Martin Smit

"It was really nice, and proved to be so much more than just my first biking holiday. I've now had the chance to get to know more colleagues since starting at Realdolmen. I will be stronger next year – and the others will be too! Until next year, or maybe sooner... Until the next Realdolmen ride!" – Che Hung Man 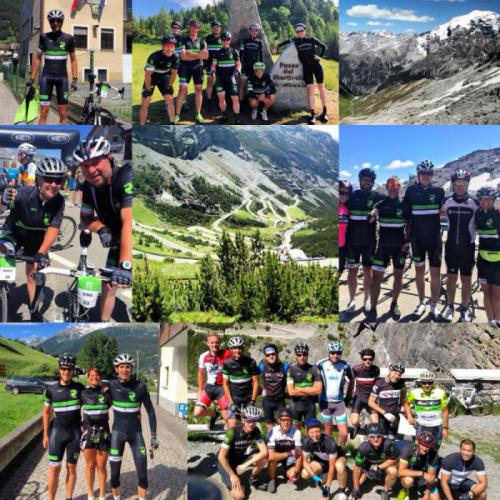